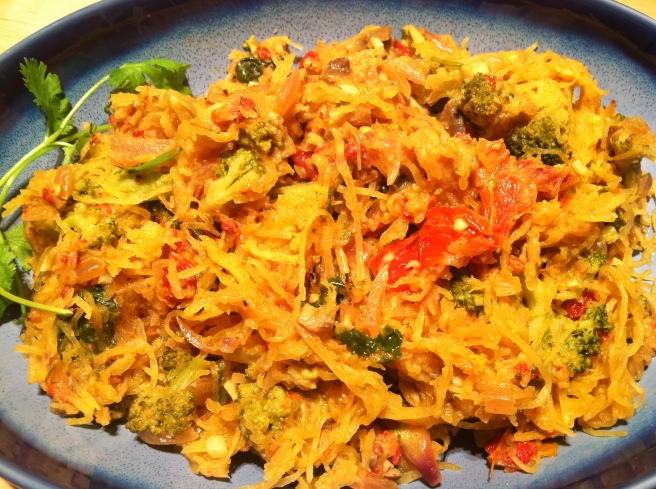 This is a pasta lover’s dream come true. I’m not kidding. As a life long, die hard pasta fanatic, I’ve been tormented by the fact that if I allowed myself to eat as much of it and whenever I wanted, I would absolutely explode …and die a happy girl. I’m almost too excited to type at the moment. This one is a homerun: quick, easy, healthy, delicious. Somehow I still managed to uncomfortably stuff myself, sigh… some things never change. But at least it’s not carbs I’m absorbing late at night, oh no… it’s allllll veggie!!! I remember feeling this way upon discovering the perfection that is the spaghetti squash, and for this same reason: guilt-free pasta. I’m just sayin’, one cup of regular noodles is about 220 calories, while one cup of spaghetti squash is a puny 40 calories. Go to town!

I kind of think of nutritional yeast as my best friend, in food form that is. And that is definitely the nerdiest foodie thing I’ve ever said. I’m still not taking it back. I make sure I never run out, I use it in everything, it completely makes up for ever missing cheesy flavor. And, it ensures I get a ton of good ole B12. Who knew it could make a perfectly cheesy pasta sauce?

First thing’s first… I’m sure you’ve seen a ton of posts out there about how to cook spaghetti squash, so I’ll throw in my two cents and keep it short and sweet. When deciding how best to bake it, the question arises: to slice, or not to slice? Slice it in half!!! I used to bake it whole, which takes forrrrevvvver to cool enough to cut it, and when you do it’s like a heat bomb explosion, plus a lot of the “noodles” aren’t cooked well enough and you yield less pasta- never cool. Slicing it length ways ensures it bakes evenly, for a shorter time and faster cooling. I think I just used to be intimidated to slice such a large, rock-hard vegetable, but with the right knife (aka super sharp), it’s no biggie. One it’s sliced, scrape out the insides with a spoon. 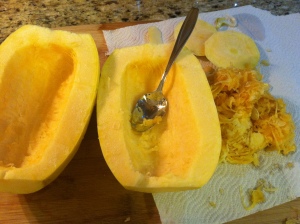 Look what I found inside… a little sprout for joy. 🙂

Place the two sides face down on a baking sheet and bake at 400 degrees for 40 minutes, remove from oven and let cool. (I suck at that part, my impatience always leads to burned fingers- sigh). Then use a fork to gently scrape down the sides releasing TONS of noodles!

4. Gradually add in 4 Tb of nutritional yeast, stir in as sauce begins to thicken

7. When squash is done, let cool, scrape out noodles and mix into sauce mixture

Served over baby spinach… this is the ultimate pasta fix for me, stuffed tummy and all.

View all posts by ashleygail